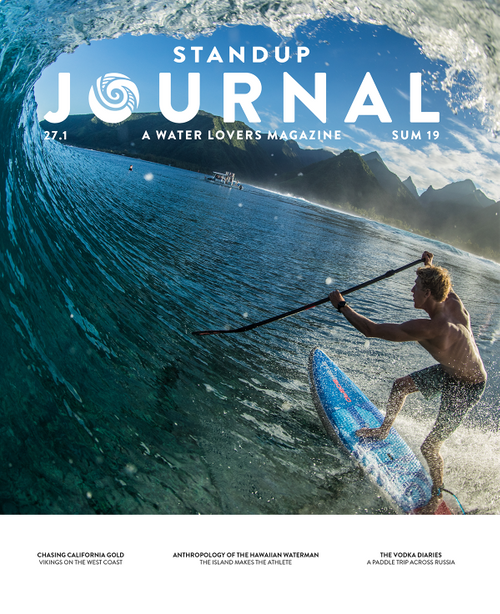 It is an honor and a privilege to take over the reins at Standup Journal as Owner/Publisher of the greatest stand up paddle magazine on the planet.

It’s been a long and robust history with the Journal to get to this point. I began my relationship with the magazine as a photographer when I first became absorbed in the surf culture in Montauk, New York.

For hours, from the beach, I photographed the surfers and especially my friend, Dave Schleifer, a forerunner in the SUP Surf movement here on the East Coast. I was fascinated by his style, the paddle in his hands, his switch stance in huge overhead surf at Ditch Plains and, of course, his exuberant behavior on the beach. I submitted photo after photo, finally getting my first (ever) print published in Standup Journal in 2010.

Next came my relationship with Gina Bradley, a.k.a. Paddle Diva, and Jessica Bellofatto as they spirited me away with them to Rincon, Puerto Rico to photograph their SUP & Yoga retreats. Gina and I worked together to build her growing brand with photo after photo, eventually landing another in the magazine.

And I paddled. I kept borrowing a board from a friend until I became a nuisance. I was hungry for a board of my own, but financially unable to swing it.That is, until one fateful night, when I purchased a raffle ticket at the Surfrider Movie Night here in East Hampton and won the grand prize: a 10’ green & yellow SUP made by Brian Hensler Designs and his friend (now mine), T.J. Calabrese.

The rest, as they say, is history.

From the day I won that 10’ behemoth board (which I thought was beautiful by the way, perhaps even magical), paddling took over my life.

Today, as a stand up paddle racer and rabid year-round SUP surfer and longboarder here in New York, I’ve traveled extensively in support of the world of stand up paddling.

As a writer and editor, I was hired in 2016 to join Standup Journal as the Online Editor. My passion for things quickly escalated this position, pretty much, to where we are today.

Thank you to Clay Feeter, Joyce Bilodeau, Adam Champagne and Scott Stahley, the team at the helm of Standup Journal when I was hired, for their tutelage and faith in me as I absorbed every facet of the magazine into my life. It is quite something to be flying this bus today.

I am beyond grateful to my creative team, Russ Scully and Jeff Henderson (no rules, boys!), for keeping me sane in this run at our first issue, and for their positive energy and incredible talent found within these pages.

It is indeed a new beginning.

The new vision and mission of Standup Journal includes paying homage to the past and what Clay has built so well. At the same time, we are looking to strike out in new directions to include periphery water sports to stand up paddling: foiling, windsurfing, kiting and more. We are focused on the environment and brands that are doing their best to support the preservation of our natural resources here on our planet. We hope to do the same.

Please take a moment to review our Mission Statement. Write us a letter and tell us what you think, what you’d like to see and your dreams of a future with Standup Journal. We are here to support you, every stroke on the journey.

Thank you! Your submission has been received!
Oops! Something went wrong while submitting the form.