Pilots make great foilers. I've seen this relationship before. Take my friend Lochie Ferrier, one of the most accredited pilots in the world who, at the young age of 24, fell in love with foiling at first sight. Lochie is one of only five pilots in the world with the credentials to fly the most sophisticated experimental electric aircraft in the world for Beta Technologies, the leader in the electric vertical takeoff and landing (eVTOL) space. Sustaining glide and maximizing energy efficiencies is paramount to piloting electric aircraft in order to preserve precious battery life for increased range. The same mental stewardship towards energy efficiency is used in foiling - particularly efoiling - which Lochie pursues with a passion whenever he's outside of the cockpit.

The physical similarities between foiling and flying are obvious and hard to ignore, but the physics of flight, whether through air or water, are what attract aviators to the sport with a feverish enthusiasm that borders on obsession. Even the vocabulary is the same. Yaw, pitch and roll are words used by flight instructors and foil designers when describing the characteristics of flight and the performance attributes of both airplane and foil.

I came across the likes of another foiling pilot on Maui last summer. Kane de Wilde is the young foiling phenom turning heads and blowing minds with his unique combination of right-brain vs left-brain renaissance intelligence and athleticism. Kane was flying remote control (RC) gliders at a young age while developing an intuitive understanding for the mechanics of how to maximize efficiency through lift and glide.

The elevation, gentle slopes, and prevailing winds of the Haleakala foothills provide the ideal environment for glider training. "Flying gliders and riding foils is the same thing," says de Wilde. "Whether I'm downwind foiling or surf foiling, I feel more like I'm flying something, not riding something. Flying and foiling are very transferable. If tuned right, the foil should self balance. You shouldn't have to do too much to keep it flying."

Kane was born on Maui. His father moved from the Netherlands to chase the wind and feed his addiction for windsurfing. The young prodigies of families like his grew up with a kinship brought on by a shared love for wind and water, spending most of their early years on the beach, wading in and out of the tide pools of Baby Beach and others. Kane's first experience on a foil was with a kite. Dez Walsh from Naish lent him an early generation prototype and, after experiencing his first upwind run on a light wind day, he was hooked on foiling. His early foiling success ignited his passion and quickly moved his interests toward surf foiling and downwinding.

The hunt was on to find waves that fit the profile for surf foiling, and the break along the Kahului harbor seawall gained a newfound interest among early foilers on the scene. Kane connected with Sean Ordonez from SOS surfboards and Paige Alms, who were early on the surf foil scene, spending as much time as possible in the harbor dialing in their progression. Foils are expensive and back then they were hard to come by, but Sean and Paige took to the young grom, providing him with a lot of time on foil before he made his first foil purchase. "That's Maui for you,” he says. “Everyone knows each other and is incredibly supportive of one another."

The harbor wave needs a north/northeast swell to work, and according to Kane they had a lot of it that first winter. "I was 16 years old and had just gotten my driver's license which allowed me to get down there as often as I wanted. That winter I saw a huge progression in my riding." Kane quickly became one of the guys to watch and it didn't take long before he had a sponsor. Signature Performance Gear (SPG) came to Maui introducing the world to high aspect foil designs. The more efficient front wings created an ability to connect waves by kicking out, pumping onto the trailing wave and continuing that pattern until the legs and lungs gave out. "I was catching ten waves in a row,” says de Wilde. “My sessions became a game of how long I could stay up and riding. The key is managing energy. Same thing with a plane.”

Not only was Kane dialing in his skill set as a rider, he was banking a ton of intrinsic experiential knowledge that would become invaluable as a foil designer. He started designing tail wings because they're smaller, can be made with less expensive materials than carbon, and gave him the opportunity to shape, test, and re-shape more efficiently. "I didn't know what would work initially", says Kane. "I just started trying stuff and surfing as much as I could. I wanted to get something that would give me a surfy flowy feeling."

His tail wings started selling. They were easily compatible with popular aluminum fuselages at the time and were gaining popularity at a hurried pace. Before long, de Wilde got into winging which broadened his tail wing applications and his customer base. His success caught the attention of Robert Pirie from Neil Pryde who gave Kane his first crack at designing a front wing.

Designing tail wings is no small feat unto itself, but front wings are an entirely different animal. "In designing a front wing that pumps well, you want to push the wingspan as far as you can without flexing. You want to use a material that is very rigid and super efficient at low speed. Too much wingspan creates flex. You don't want flex," says Kane.

Fortunately, Kane had developed an early interest in 3D modeling software when he was in middle school. He was intrigued with boat hull designs and was interested in learning how to make them go faster. He got his hands on an early version of Rhino, a commercial 3D CAD software program, and started the process of learning his way around 3D modeling while applying and exercising his innate understanding of how objects move most efficiently through water. His curiosity was on fire and his appetite for learning was that of a hungry entrepreneur. "I'm really happy that I have something like this that I can pour everything into. I'm obsessed to a fault with always wanting to learn more," says Kane.

Kane's knowledge of boat hull design transferred to board design when he met fellow flying Dutchman, shaper and founder of SIC, Mark Raaphorst. "Mark hooked me up with boards and gave me some work to do. I would go home with a few hand shaped boards, measure them and digitize them into 3D models that could later be CNC'd for production. I spent a lot of hours measuring boards and transferring their dimensions into 3D models. I got pretty proficient with the Rhino software," says Kane.

Before long Kane was designing his own boards and Mark was building them. "Mark's Flying Dutchman construction is unmatched," says Kane. "I honestly believe Mark builds the best boards and I'm really stoked to ride for him. He likes some of the ideas I bring to board design. He'll see something that looks crazy but then he'll roll some of that thinking into his own designs," Kane laughs.

With a solid board building partnership in place, it was time for this young entrepreneur to start thinking long term about his foil design future. That was about the time when Peter Lederer of Hood River, former foil designer for the Spencer boys, approached Kane about starting a company. Until this point, Kane had politely and humbly turned down a number of other options and opportunities. Sponsorships and design opportunities were not scarce for this aspiring athlete/engineer, but Kane was holding out for the ultimate dream of any entrepreneur: to launch his own brand. That dream took shape this past summer in 2022 when Kane’s brand, Omen, made its debut at the Columbia Gorge Paddle Challenge. "Our production schedule for our first foils ran a little late as expected, but if all goes well, I'll have two days to test them in the Gorge just prior to racing them," says Kane.

At the time of my sit down with Kane, he had just won the Maui 2 Molokai downwinder on an early prototype of his new foil design while riding his own flying Dutchman board design. Not only is he capable of winning races, he's winning on equipment born out of his own ingenuity. Kane is a true renaissance man pairing engineering intuition with the athleticism to be among the best in the world. The ideal feedback loop for any engineer is to personally test your own equipment, capturing every nuance of every data point in real time. Not many designers have that luxury. In most cases athletes need to communicate their test experience to the design team which then results in a successive version that then requires follow up testing and feedback. Closing that loop to a single individual capable of both designing and riding at the highest level in the world is where the best of the best is born. It's no wonder this young phenom has been courted by industry brands for so long before going off on his own.

"My knowledge of foiling is a crossover of everything I liked to do before. It's a perfect mix of kiting, winging, sailing, and remote-controlled planes," says Kane. "I can continue designing for a few years, get some experience, and then if foiling dies, I can take all my experience and apply to school or go get a job in aviation. I have a pretty solid resume, I guess." It's too early to bet against the future of foiling, but there's no doubt de Wilde's experience and intuition make him equally attractive in any comparable industry. 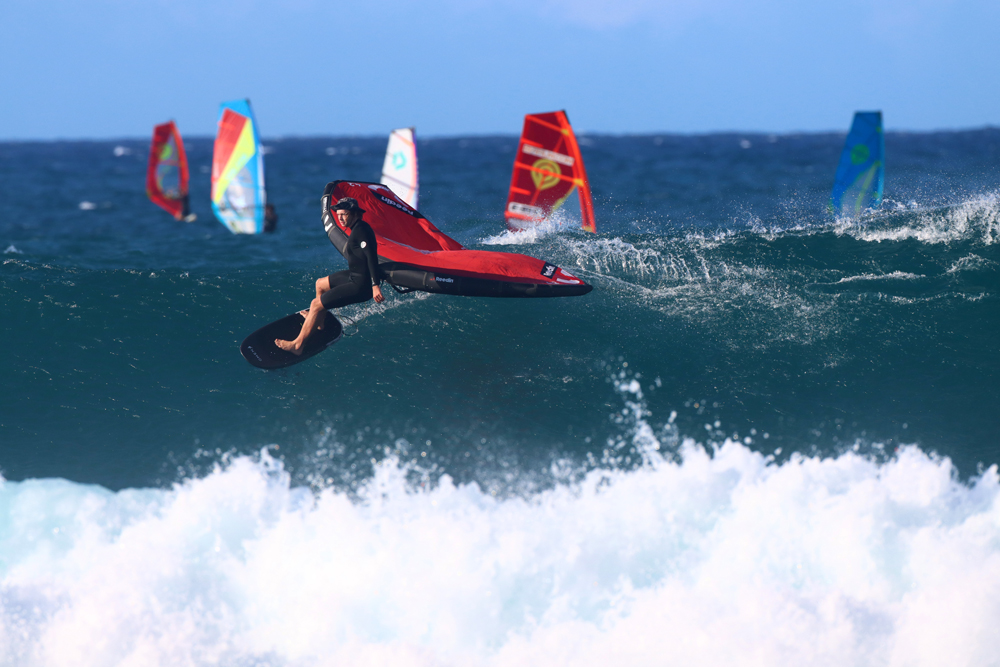 The research and development lab is always open when this young designer/athlete is on the water.Erik Aeder 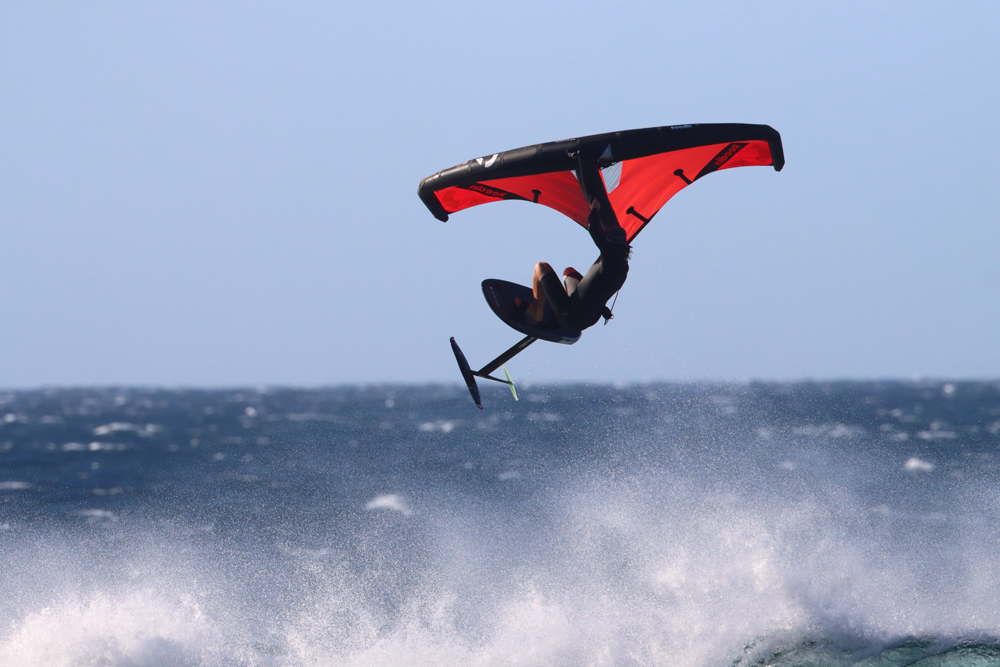 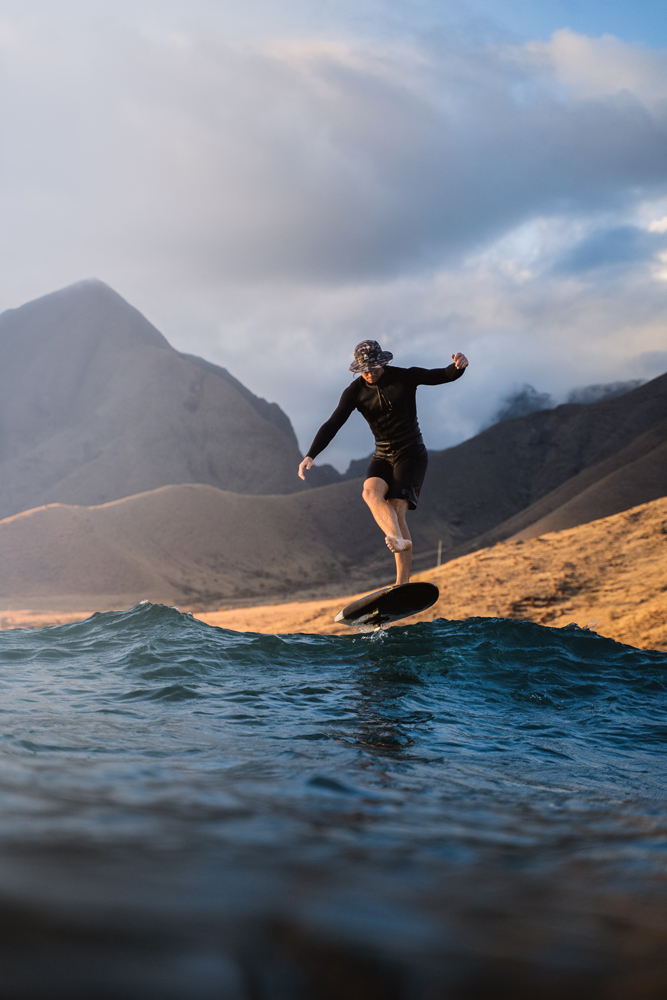 Mateo Dudu
De Wilde enjoying a late afternoon foil session with friends on the west side of Maui.Mateo Dudu 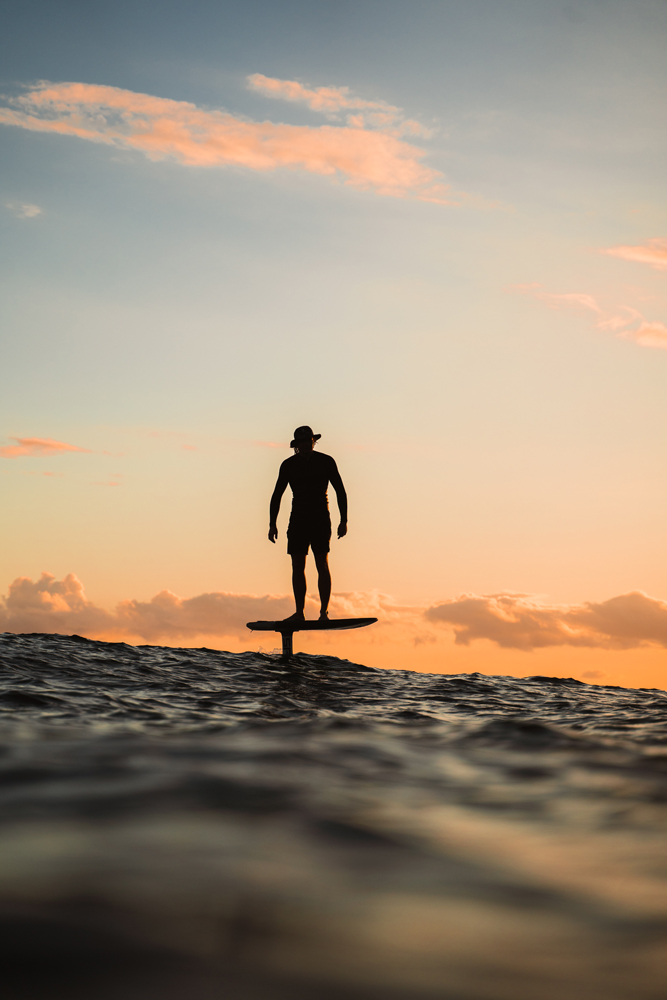 De Wilde's innate understanding of flight give him the efficiencies to stay on foil well into the golden hours of the day.Mateo Dudu
Kane exiting the water after another session on his latest Omen board design.Erik Aeder
Words by